A Foray into The World of Damon Runyon 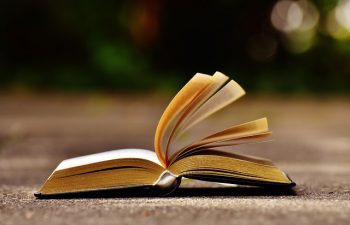 So when my other half announced that ‘no one can write like Damon Runyon’ my immediate thoughts were ‘you a’int talking to any ordinary dame here…bring it on’.

Mistake #1 was to watch the likes of Goodfellas and the Godfather. I would have been far better served digging out a DVD of Bugsy Malone.
Mistake #2 was to fall into the trap of thinking all I had to do was find a sympathetic character, let him loose on a plot notion and slip into gangster speak. Damon Runyon is the kinda guy who defies all the rules.

The undisclosed narrator who speaks likes there’s no tomorrow.

Maybe because in reading his work you are so easily sucked into his world that you don’t notice anything different, but take a moment to step back and you soon realise that, literary speaking, you are in a very strange world indeed.

#1 – Everything is written in the current tense, and I mean everything, even the things that shouldn’t be. The past is related as if it was today and the future simply doesn’t exist. The passage of time is a paragraph break when, ‘a couple of weeks/months later’, the future becomes today.

#2 – There are no contractions; no it’s or I’ll’s or don’ts, won’t’s or shan’t’s. But conversely there is lots of very formal speech mixed with colourful slang. The pages are awash with dames, ever lovin’ wives, John Roscoes, citizens, merchants and snatch, all drinking needled beer, squawking, causing disturbances and being most dishonourable. The result, formally accepted in literary circles as ‘Runyonese’ is rather like listening to Dell Trotter in reverse, only he’s American. Or to put it another way, if you have never seen ‘Only Fools and Horses’, the effect is not unlike listening to my Sikh friend talking to her hubby on the phone. The conversation bounces along in Punjabi until she happens across a word with no direct translation or simply forgets that she is not speaking English. So you hear, Punjabi, Punjabi, Punjabi, Thursday, Punjabi, Punjabi, Punjabi, Punjabi, Punjabi, just pick her up, OK, Bye. The first time you hear it seems odd, so odd it’s hard to resist listening in.

#3 – The story is told through a narrator, only you never find out who he is. He is, for all intents and purposes, an omnipresence guiding you through the plot, who by means of clever writing distances himself from everything that’s happening. The effect I can only liken to sitting in a Manhattan bar listening to a guy telling another guy this amazing story about the goings on regarding some other guys. You are there, but you’re not. So you order another drink and stick around to listen some more because the barstool is comfy, the ambience is very soothing and you rather wish that you knew these guys poisnally (sorry – personally).

Damon Runyon has earned his place in posterity. There is a Damon Runyon Cancer Memorial Fund, a Damon Runyon Award for prominent journalists run by the Denver Press, a Damon Runyon Elementary School in Colorado, the Damon Runyon Stakes run on the Aqueduct Race Track, a block on 45th Street in Manhattan called Runyon’s Way. And a bloke in my local library who, on hearing my failing efforts to source one of his books from a non-plussed librarian, stepped forward to correct my mispronunciation of the writers first name by announcing, ‘actually its Damon Runyon, he was a writer from the 1930’s.’ I still didn’t get my book, they only had one copy of one book in the county and it had gone missing, no doubt nabbed by some unscrupulous miscreant. 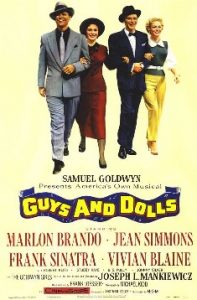 Movie poster for Guys and Dolls

Damon Runyon is everywhere, in all the places I harbour affection; on screen and stage. I just never realised. He is the inspiration for the 1955 film ‘Guys and Dolls’ with Marlon Brando and Frank Sinatra, ‘The Lemon Drop Kid’ in 1951 starring Bob Hope, ‘Money from Home’ 1953 starring Dean Martin and Jerry Lewis and ‘Little Miss Marker’ that launched Shirley Temples career in 1934 and was remade with various titles, in 1949 with Bob Hope, 1962 with Tony Curtis and 1980 with Walter Matthau, to name but a few.

All these films I personally rate as being streets ahead of the likes of ‘Casablanca’, not least because at some point someone generally bursts into song and someone makes you smile. And that’s without mentioning the rich stage and radio dramatization presence of the many works of Damon Runyon.
The man wrote for the people and the people liked him, and by all accounts it seems still do, but they don’t make a song and dance about it.