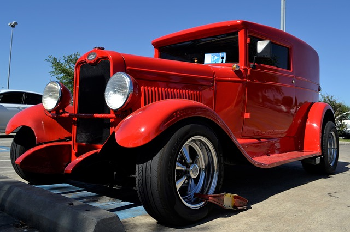 It is a nice day; one of those days when even the cab drivers are apt to smile and a guy can traverse the sidewalks of the Apple, and feel good because the sun is shining and the citizens are not depressed beyond the normal. I am minding my own business on my way to do this and that because a guy has to earn a crust, when I spy Tommy Two Toes alighting out of a cab and by the look on his visage seeming to be less than appreciative of the unexpected fine weather.

I am curious because I know Tommy Two Toes is a guy of fair means, and even temperament come to that, and is not normally seen using transport other citizens use when he’s got a perfectly decent tin can of his own. And I know for a fact that his ever lovin’ wife would not have seconded said tin can for some dame related activity because Tommy Two Toes, despite his even temperament, would be seriously put out should she accidently break it and put his foot down firm against any notion she might have about learning to drive.

“Dames behind the steering wheel,” Tommy Two Toes is well known for stating should the subject ever come up in the course of a chinning, “is not a combination you want to encourage if you plan on sleeping nights.”

Tommy Two Toes has a pleasing way with words and is the sort of guy you generally don’t mind bumping into on the sidewalk because as a rule he is apt to be optimistic. He earned his moniker as a result of an unfortunate incident with a john roscoe that goes off, according to Tommy Two Toes, “ for no good Godly reason, ” and is far more perturbed about the unrepairable damage to a his Italian leather shoes than the unexpected loss of digits; said shoes being new and hard earned in the days when scratch is a rare commodity. For all the years I know Tommy Two Toes he has an optimistic outlook, though is apt be confounded as to why he can attract passing skirt without any effort on his part, but not, it seems, lady luck. Tommy Two Toes has the kind of cow eyed look about him that makes him a Sheik in the eyes of the average dame, an attribute he views as a kind of unfortunate and unwanted affliction. With all this in mind it is a matter of some concern to witness such a marked change in the demeanour of a guy you might consider a friend, if friend was not so often proved a misguided notion when you find yourself unintentionally fingered for some misdoing, So I detour from my agenda to offer a friendly hello and ask after his general well- being.

It transpires that Tommy Two Toes has business to which he needs to attend, the details of which I purposefully don’t enquire after because it does a guy no good to know too much. So I enquire after his lack of independent transport, to which he exhibits such an uncommon turn of despondency I decide it would be churlish not to encourage the guy to take a moment out of the day to discuss the matter. Tommy Two Toes takes a moment to decide if he can make the time and with him looking a little less despondent by the prospect, we adjourn to a nearby coffee house called Frankie’s.

Maybe it is the time of day and Frankie’s being uncommonly uninhabited, or because the Jane taking the order is deliberately over friendly toward Tommy Two Toes causing him to scowl in a most inhospitable manner, but he is suddenly more than willing to chin and my curiosity being roused, I put aside my this and that’s and sit and listen.

Now, it’s a much enforced law, often with extreme prejudice, that any self- respecting guy doesn’t mess with another’s dame much less their ever lovin’ wife, even if the dame or ever lovin’ wife finds the prospect quite appealing. However, it transpires that Mrs Tommy Two Toes, who is by no means hard on the eyes and has very little to complain about because it’s a well circulated knowledge that Tommy Two Toes is apt, with the exception of driving lessons, to be extremely generous toward her, has become inexplicably enamoured with another. Tommy Two Toes tells me, with no small measure of chagrin that he knows this to be true due to the fact that he hires a Shamus to spy on her.