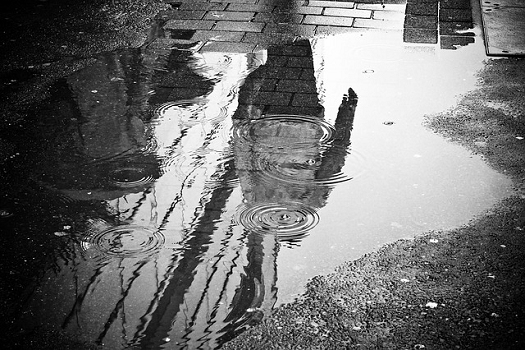 Fatigue troubles him of late. It creeps up uninvited and settles on his shoulders; an unassailable weight pressing his eyelids shut.

It is summer and he is young. The kitchen is filled with the aroma of baking bread and acrid coal dust from his fathers dirty pit clothes soaking in a bucket of steaming water. Waving his booted feet in mid air, idly marking time until dinner, he sits on a high backed chair with his back to the window content just to sit in the dimness of the kitchen soothed by the familiarity of home.

He knows without looking that beyond the kitchen window, across a paved yard, there is a garden pressed behind a rough stone wall. The garden stretching endlessly forward under a blue sky, is reached by steeply rising steps and filled by row upon row of vegetables and a rhubarb patch with immense glossy leaves. He knows that beyond it lies the village, other gardens and other houses, each a mirror of its neighbour laid out in long rows, side by side and back to back. All are overlooked by the pithead standing so tall at the top of the hill that he could almost believe the immense turning wheels could touch the evening sun…and he knows that one day his father will go there and never come back.

“What you doin’ our Jeffrey?”

He turns toward the disagreeably sharp voice, her face drawn and eternally tired as she turns from the sink wiping her hands and leaving damp patches down her pinafore. Smiling at the softness of her eyes, hazel like his, he shrugs in mock offence as she tousles his hair.

Jeffrey wakes with a start, thin strands of hair the colour of ashes brushing the map of lines on his cheek. Gazing out in alarm at unfamiliar magnolia painted walls he feels the rise of a moment’s panic that occurs too often and too often refuses to go away.

“What’s for dinner?” He poses the question to no one in particular, his mind still stubbornly held by the aroma of baking bread.

“It isn’t time yet. You’ve only just had breakfast.”

Her voice is disagreeably sharp and he stares with eyes wide half perceiving the dream, half perceiving a much less familiar place. His panic growing as her image, face drawn and eternally tired, dissipates into the unfamiliar magnolia overlaid by another too much like one his mind won’t release to be different, yet just different enough to make him doubt. He should know, he knows he should, the electric clock tapping out the seconds as his mind searches the meandering paths for the place where he left her temporarily lost.

He should know this time, this place and all the things in it and is almost certain that just beyond the window is a garden neatly packed with flowers. Yet it has all collapsed into uncertainty and he falls into the strange and lonely abyss where anxiety churns his stomach and steals away his appetite.

He might cry, unsure that he could stop the tears even though it feels wrong, unseemly, his pride unable to hold back the need. That too, lost temporarily.

“Are you alright?” She steps forward, her hand outstretched to smear comfort on his arm and soothe his tears falling over fragile skin.

Her eyes are soft just as he remembers, panic falling into confusion as the years fall together into a tangled mass. She is crying too, holding back the tears behind a red rimmed and glossy sheen. The feeling, it seems has become infectious, endlessly stretching outward like his childhood garden under a sky that is no longer blue.

“Jenny.” He reaches out to touch her, instinct leading him to untangle a thread from the confusion and recognise a face youthful and beautiful, unchanged. Speaking her name as if she was never lost, his voice wavering from the aftermath.

“Yes love…I’ll make us a cup of tea.” She is smiling now, lifting her hand to her face as she walks away making no more comment on his tears. That moment has passed and there is no reason to remind him of it, though in a moment he might wonder at the moistness of his cheek.

Pushing himself stiffly out of the armchair he follows her, tracing her steps through fading eyes. Pulling her out from the tangle of past events and people to keep her close and never lose her again.

“That’s OK love…I’ll do it,” Jenny squeezes his hand, fragile and childlike. Responding to his pale fear haunting the gadgetry of the kitchen made simple that he might still understand it. The marker on the milk bottle so that he might know which one to use. Perhaps misunderstanding his fear this time, though the weight of understanding burdens her dreams and sometimes, too often, makes her heart beat too fast.