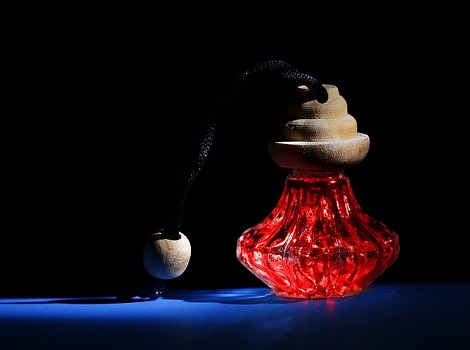 She turned, fretful, mindful of the room. That the curtains were closed shutting out the brightness of a sunny afternoon and the faces she knew far too well. Not that they could see. She knew they couldn’t, not through an upstairs window. But still, just in case she took the few steps around the bed to be sure, overlapping one drawn curtain over the other in a sharp movement and letting out a frustrated sigh when they fell back to where they had been before she made the effort.

The room bathed in twilight shadow, she stood, her hands splayed against her hips and the freedom of silky draped cotton, just the mention of a smile pulling at her lips and creasing her face with guarded pleasure.
Returning to the dresser she eased out the stool and sat before the mirror. Her reflection looked back expectant and indulgent, illuminated by the bedside lamp sitting uncomfortably on the dresser edge, urged back to where it belonged by a cord that was just a fraction too short.

Slowly, she pulled her fingers across the bottles and tubs; crisp and clean, rounded and comforting, each concealing a secret all their own. A rainbow of colours and textures and smells made all the more mysterious and marvellous by the half-light of the room and the distant sounds of another world beyond the curtained window.

In this room veiled in a gossamer thin layer of dust as if it had lain untouched waiting her return, she could feel herself slowly disassemble. Her reflected features moved out of focus, waiting for her to pull the image back, feature by feature from the secret place in her head where desire had formed and hidden it. The place where she had hidden her secret self from the burden of duty endlessly turning like wheels grinding tarmac drowning out the view and the sound of a voice that no longer took the time listen to.

Slowly she traced the line of a bottle with her outstretched finger. Cold hard glass with acute edges pulled and turned into something beautiful playing with the light. Pulling it in and reflecting it back softly distorted, like the sun on a lake arousing a recurring dream. A dream that she might stroll into its depths and simply vanish, leaving all she had ever been neatly folded on its banks to confound a world that refused to understand.

She drew her finger back from the bottle. It wasn’t yet time.

Unwinding the top from a tub she delved her fingers into its contents; smooth white cream with the sweetly tinged aroma of contentment. Burying it in her pores and sweeping it up beyond her cheeks to her hairline feeling it melt beneath her fingers.

Foundation next; pouring a creamy skin tone pool onto a sponge and wiping it quickly and carefully until it covered all the features of her face. Only her eyes, wild blue and excited, peering out from a blank canvas and drawn back to the bottle softly glowing in the light of a lamp that had become the last rays of a sun in the twilight.

Eye shadow, blue to match her eyes, trailing colour across the arc of her eyelids, where the firmness of youth had been betrayed by swiftly forgotten years. Then mascara and rouge, stretching her face to rediscover features lost in mire of unfamiliar sagging flesh. Each applied with growing impatience as excitement rolled and tumbled free, drowning out the sound of children’s voices; scavenging seagulls shrieking abuse through the gap in the curtains that refused to close.
The sheer unabashed pleasure of it all drowning out too the sound of a car engine falling to abrupt silence just below the window a million miles away.

Lipstick last, her hand trembling, caressing pale lips with the redness of ripe cherries. Pausing for a moment, the portend of something freezing her fingers with sudden dread. Twisting on the stool to peer into the twilight where the world beyond the window seeped through the curtains in a shaft of blinding light.

Turning back at last. Dismissing her fears with a smile seduced by the reflected image complete and so totally flawlessly real that desire danced free in a twilight world that was deaf to any other. Deaf to the turning of a key in the lock and the opening of a door. To the calling of a name in a voice far too familiar and footsteps rising up the stairs one by one, curious of the silence and the light in darkened room on a Sunday afternoon.