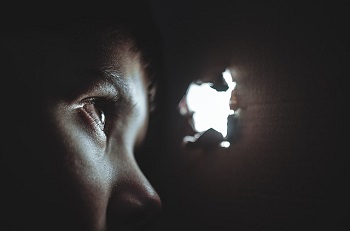 “Get out,” he growled, his head pressing like a burden on his shoulders, still looking forward and hanging onto steering wheel.

The girl shuffled backwards against the car door shaking violently.

“Get out,” he repeated, leaning clumsily and stretching one arm over her lap. “I’m not going to take you any further.” Releasing the door catch, he watched as the girl fell backwards into a quivering heap on the grass verge. “I’m sorry,“ he whispered finally, not knowing or caring if she heard or registering the few moments that she sat like an abandoned infant in the failing light, staring at him with wide-awake and terrified eyes until she gathered herself together sufficiently to kick the car door shut.

Driving away, George headed toward the darkening horizon and kept driving, steering away from the signs of cities with the vision of Marietta wavering in front of him. Choking and stuttering under the pressure of his fingers, she had pleaded for him to stop. Watching her gag, her wide eyes staring blindly somewhere beyond that time and place, he wanting so much that he could have stopped and avoided the dull, heavy aftermath when her eyes rolled and she fell silent and still. Wished that he hadn’t felt the awful empty feeling that next time she might die and knew that the terrible monster lurking in the darkness of his soul was lusting for the time when she would.

He drove on, cutting through the night. No longer tired, he didn’t want to ever feel the weight of exhaustion ever again. .

As dawn rose, the engine groaned gently, propelling the car over the summit of a hill and slicing through an ancient wood. Emerging from the darkness, George pulled the car to a stop.

Beyond his windscreen the low horizon was a glowing cauldron, the spire of a church piercing the spreading pink and gold fire filling the sky. Before him the tarmac drifted downward, a dark river flowing steeply to the sharp silhouette of the church. George urged the car on, rolling down the hill between high hedgerows, a thrill rising in his chest. The narrow Roman arches of the church windows finally filling his view, he slowed the car and stopped again.

For the longest time he sat there, his hands wrapped around the steering wheel, moving his eyes over the hard man made edges and the softly shifting immensity above, beyond the touch of humanity. Immediately before him the road swung left, skirting a pavement and a wall of grey stone. Above the wall sat the rising walls of the church, standing on a pulpit of packed earth and the falling grave markers of the long since dead.

Smiling, George pulled on the steering wheel and turned the car back up the straight tarmac river to the top of the hill. Swinging it around again to face the rising steeple and impenetrable wall, he took a deep breath and slammed his foot on the accelerator.

For a moment that lasted a lifetime the world fell completely silent. The hand of the speedometer pushing ever closer to the red, Georges’ head filled with the pressure of momentous joy and sheer exhilaration. His heart beating fast and hard, he was a child again, set firm in his intention. His mothers’ best china teacup sailed through the air and began its descent to collide with the lino floor. As it exploded into pieces, the car bounced up the pavement edge, the wall looming just a breath beyond, Georges’ world flashed searing red and then plummeted into black oblivion.