Ireland (Part 1) – Where the people wave at strangers 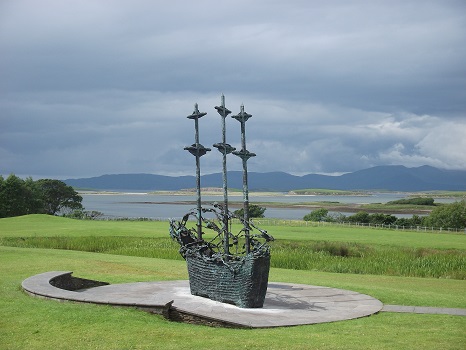 It’s not surprising that Guinness has come to represent the darkly enigmatic country that is Ireland. And, no I’m not sidestepping the interestingly frothy top, through which you have to delve to get the true sense of all that rich darkness. The Irish have a gloriously irreverent sense of self and a normality that is often wonderfully eccentric.

“Stop being so English and wave.” My other half being irrevocably Irish, though he was born in Stafford, told me as I sat in the car ignoring the waved greeting of passing pedestrian locals.

I soon formed the opinion that it doesn’t matter how much of a stranger you are, you can never be beyond the open armed welcome of the locals. Sit in a corner of a pub nursing a drink and it won’t be long before you’re shaking hands and discussing shared interests with someone you didn’t know from Adam when you walked in.

It’s hard not to be irresistibly charmed by the Irish for simply being Irish and you soon realise that it is much more than a mere nationality, it’s a state of mind. Even the roads have a hard shoulder specifically for the purpose of allowing other cars to pass if you choose. And it seems, pushing your pram down to the shops or walking back from the pub.

This is our second visit. The first time it was earlier in the year and we rolled off the Ferry at Dublin to be met by grey clouds and rain that hung around the whole week. This time after negotiating our way out of Dublin (the Irish haven’t particularly embraced the concept of road signs) we were to pick up the N road and head cross country sweltering in sweaters, jeans and 24 degrees of unexpected sunshine. 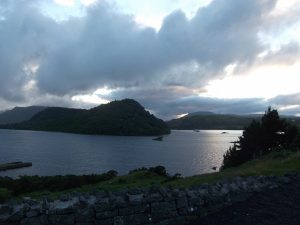 On our first visit we headed for Galway in the West. Our destination a cottage on the banks of Lake Corrib, weaving our way along a winding road following the twists of the lake. This time it was September and we were heading a little further North West to County Mayo, where my other half’s Gaelic roots spread deep under the peat bogs.
Well that was the plan as we nosed our way through the streets of the ‘Fair City’.

“Dublin is not Ireland,” the other half grumbled his dislike of the bustling commercial metropolis as we made yet another wrong turn.
The original Gaelic name for Dublin is Baile Atha Cliath, which means ‘town of the hurdled ford’. Some things, it seems, never change.

Once free of Dublin’s confusing roads, the scenery opens out to swathes of rural green.

Rolling along the wide smooth N Roads it’s very easy to imagine that you are still in the UK. However, it would be fundamentally wrong to imagine that Southern Ireland is England with an accent and green post boxes.
Ireland is slow matured with one foot firmly buried in tradition and heritage. Historically it has been one step behind when it comes to embracing change. When the UK youth was thrashing about to various music trends in the early seventies, the Irish rural youth were still waltzing.

That’s not to say that rural Ireland has managed to avoid change. Judging by the musak escorting us round Tesco’s in Claremorris, they are no longer so out of step musically. 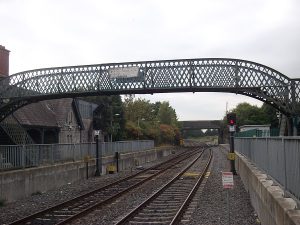 Toward the end of our trip we drove to Portarlington in County Laois (pronounces Leash), where the other half spent his boyhood summers. Finding a housing estate instead of the fields he walked to reach his grandmothers cottage, he was completely thrown if not mildly traumatised. And this wasn’t because his memories of that time include leaning over the iron pedestrian bridge at the railway station to watch the steam trains. He isn’t actually that old. The first consignment of diesel locomotives wasn’t ordered until 1953, and then it was only 100. At the time the 3500 miles of rail network were being rationalised, leaving the countryside scarred by disused rail lines without any real re- investment until the economic boom of the 1990’s.

Like its people, rural Ireland is expansive. Dotted with tiny villages and small towns, each has similar elements that make them indelibly Irish and undeniably charming. The houses, mostly single storey and almost exclusively pastel emulsioned, appear as neat highlights against the green as you hum along the winding roads linking one village and town to the next. It’s very rare to find a home that isn’t pristine, with manicured lawns, tended tubs of flowers and the occasional gnome.