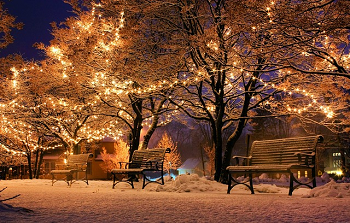 “The night was so incredibly beautiful, but all I saw were ruby drops in the snow and the broken wings of the murdered angel and I was scared, so scared…” His words trailed off as he sat staring at his fingers as if they were somehow unfamiliar.

No longer aware of the bright trimmings of Christmas, she got up from her chair and crossed the room, her whole body aching as if at the end of an arduous journey. Outside, the matt black of the night pressed against the living room window, the bright intermittent spray more like so many peering eyes than the warm glow of reflected fairy lights. She closed the curtains, throwing them together a little too quickly, but the image remained.

He was groaning now, his face buried between the broad palms of his hands.

She moved toward the armchair where he was sitting afraid that the face beneath the hands would no longer be the face she remembered. Afraid the images in his head would replay like an endless nightmare through eyes she had once admired for their impeachable softness.

There could be no truth in what he was saying. She told herself over and over, silently chanting an illogical protection against a witches spell; an evil she had seen in the images created by his words that had no place in the real world.

“Jed…You aren’t well,” she took a step forward holding out a hand to comfort him, then withdrawing it.

He fell back against the chair back and stared at her, his palms flat against the pristine cream covers she had so carefully washed and replaced to hide the wear and tear.

Just for a moment she remembered him the Christmas he sat there for the first time clutching a diamond cut whisky glass as if he might faint from the effort of speaking. Until that night the intervening years didn’t seem to have touched him. Until that night she thought she knew him well enough to trust him without question. Now everything was distorted; his eyes once radiant blue, darkly unfamiliar, tracing her outline with terrifying cynicism as she stood impotent and barefoot on the rug they had knelt on to wrap presents only a few short days before.

“Why do you fill your house with all this stuff?” His eyes left her, shooting wildly from the holly garland draped on the mantelpiece, to the table centrepiece of red candles, the sprig of mistletoe hanging above her door and settling on the tree they had spent so long adorning with tinsel and ribbons and the smiling angel perched on the top. “You don’t know what all this means – You don’t have the first idea of what you’re doing.” His mouth lurched as if he had been stricken by palsy, his eyes as dark as the night beyond the window, holding her where she stood and defying her to move.

“It…It’s Christmas Jed, they’re just decorations.” She tried hard not to cry and let the weakness in her legs become an uncontrollable tremble in her voice. “…It’s just Christmas spirit.”

“Christmas spirit…” He was laughing, mocking, his mouth drawn back in skewed sneer. “If you knew what it was you wouldn’t invite it in. All your precious holly and candles and Yule logs you don’t know what any of it means – Well I do ‘cos I’ve seen it.” He pushed himself upright staggering under his own weight.

“Jed! “ She rushed toward him, instinctively reaching out forgetting she had ever feared him.
.
“It’s no good you trying to help me now. It’s too late.” He pivoted sharply swinging one arm as if it was a leaden weight, knocking her aside and grabbing at the chair arm with the other.

She reeled backwards, shocked into silence, standing hunched against a pain she could no longer reason.

“It’s the lights. They follow them.” He leant heavily against the chair, his eyes closed against each laboured word. “They remind them of the old time. They bring them back – The spirits of the old world.” He turned his head slowly to reveal skin the colour of dead ashes. His face scarred and tortured, eyes stricken with remorse, he continued as if the power of speech was deserting him. “Birth and death. Life and sacrifice – You can’t have one without the other – There has to be a balance – And when the angels come they try to get to them first…”