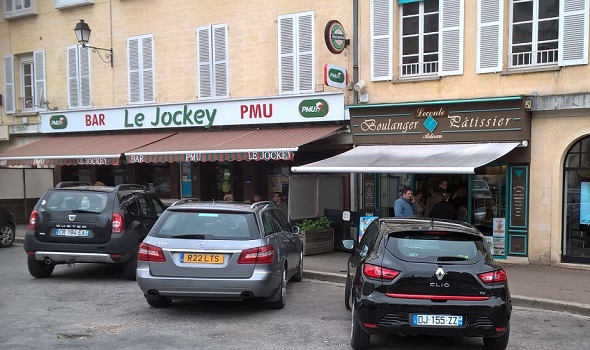 Bathed in glorious May Day sunshine, we set off for the long drive from the barren moors and frequent rain of Greater Manchester to pick up the Ferry and begin a much needed holiday. In previous years we headed for Holyhead to cross the Irish Sea to visit the husband’s homeland of Southern Ireland. This time we were heading for Portsmouth to cross the Channel. We were going to Normandy.

We were going en France !

I had visited Monet’s garden, seen Audrey Hepburn in ‘Gigi’ and Gene Kelly in ‘An American in Paris’ and one of the husbands favourite films (amongst any that involve men indulging in manly confrontation) is ‘The Dirty Dozen’, but we had no real idea of what en France would actually mean and Normandy in particular.

The husband had booked us a cabin for the seven hour crossing over the Channel so we could ‘crash out’ for the duration. 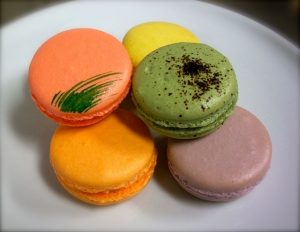 After munching through the complimentary breakfast, he settled cross-legged on his cabin bed with the look of a happy little leprechaun to monitor our sea faring progress, while I admired the complimentary fruit basket and box of multi coloured macaroons.

Beyond the spray spattered windows of the ferry the waters of the Channel at Portsmouth were an alarming shade of green, the impressive full size bronze of a horse nuzzling the lower deck carpet seemingly trying to escape the overpowering smell of stale sewerage.

Rumbling out toward mid Channel, whipped up by the forecasted hefty winds into what the husband termed knowledgably as being ‘lumpy’, the boat began to lurch, but the water had at least turned a more reassuring earth tone.

I had fallen foul of seasickness once before on a ferry crossing to the Isle of Man for a funeral, sitting with my eyes closed while my rotting insides swelled and receded like the effluent coloured tide on Skegness beach. Determined not to lose my complimentary croissant I adjourned to my cabin bed. There I stayed, lying with my face buried in the mattress until the tannoy announced that we were about to arrive and the boat began to wiggle its way into Caen harbour

‘Seriously’, the husband groaned as I scooped up the fruit basket and macaroons and cleared the ensuite of all the toiletries.

Batting away his disapproval I carried on. Living in hotels with my job has rendered me appreciative of every small perk; I haven’t bought a bar of soap in years.

Toting one more carrier bag than we had boarded with, we joined the impatient fellow passengers huddled hopefully around the closed door to the car deck. Front and centre a man leaning against the door frame dropped his paper cup of coffee, lurching unsteadily to pick it up again. Righting himself, he resumed his position leaning against the door frame and began a slow descent head first. Our little group watched the descending man with the self- righteous disdain and morbid curiosity we Brits are so jolly good at, until one brave soul made a move.
‘Are you OK mate?’ a grey haired Good Samaritan had shuffled his way from the back of the group to place a supporting hand on the descending man’s shoulder.

‘Yeah, I think so,’ the descending man halted his descent and smiling uncertainly, righted himself again.

‘He’s pissed,’ the husband announced his diagnosis to no one in particular. For my part I was more concerned that he was about to drive a car on the wrong side of the road. Maybe even the same road as us.

Ah, the wonderful complexities of the human condition.

As if anyone ever needed an excuse to take a holiday abroad, we kind of do. Normandy has the Bayeux Tapestry and the D Day land beaches, but it wasn’t until we were there that I got around to locating the region from my scrappy knowledge of France. 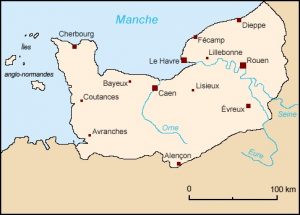 It sits on the Northern edge of France and is divided into two regions, Upper and Lower Normandy, a hop and a skip from Paris and Le Mans. Upper Normandy takes in the harbours of Dieppe and Le Havre and includes the regions capital Rouen where Joan of Arc was executed.
We were going to Lower Normandy with its two harbours Caen and Cherbourg and the historically notable Falaise, and Mont St Michel as well as Bayeaux and the D Day beaches. Apparently it’s popular with us Brits in search of more than sea, sand and sailing dinghies.